My first ever political campaign

I work with, and spend a great deal of time on, the internet. As such, I’m a classic ‘slacktivist’.

I write long blog posts, I tweet (sorry, if you followed me before the Yes campaign and I’ve flooded your timeline), I email people links (like the fantastic Wee Blue Book, a fully impartially referenced case for a Yes vote).

I’m hopeful that all this typing may have changed a few minds, and even if I haven’t changed anybody from No or undecided to Yes, they’ve at least been exposed to something that isn’t a caricature of frothing nationalism. My main hope is that anyone who has read my posts or tweets will be stepping into the voting booth having heard a decent case for Yes and will be making a rational and conscious decision for or against, rather than going purely with gut instinct.

However, I felt like, whatever the result, I wouldn’t feel I’d really done enough if I didn’t volunteer at some point. So I spent about six hours today working my way along the Super Saturday ‘Mile of Yes’, a combined campaign from a half dozen different groups all working for Yes. 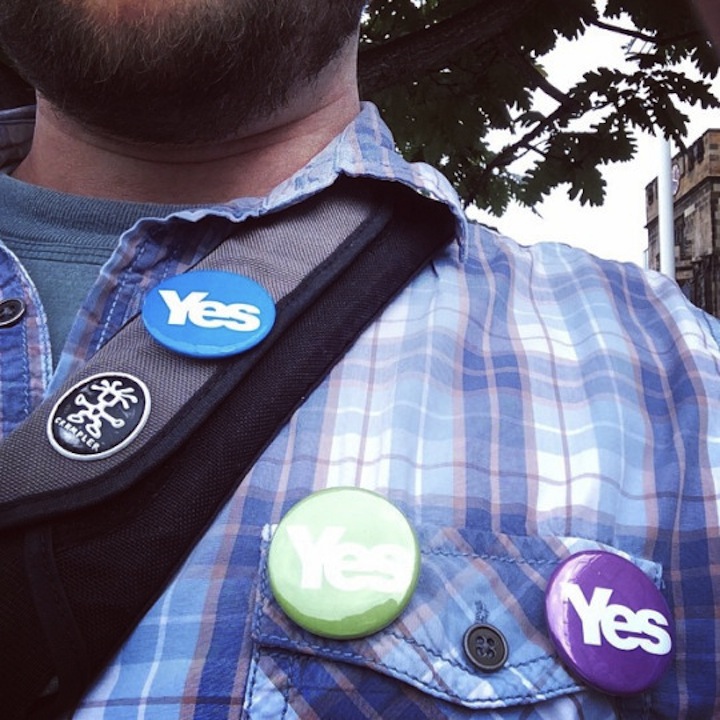 I handed out dozens of flyers, leaflets, badges, balloons, stickers and copies of the Wee Blue Book. I spoke to Yes voters, No voters and undecided voters and it was fantastic. Out of maybe four hundred or more people I spoke to, I got an unkind word from maybe three. Even the vehement No voters I spoke to were nearly universally polite, thanking me for campaigning and for being engaged and doing something.

More than anything else, seeing that particular reaction a half dozen times gave me real hope for the future of Scotland, whether Yes or No. It is deeply heartening to see more and more people who don’t think politics is just something for election time, best left to people in shiny suits. That impression only benefits established, moribund parties, because it lets them focus their resources on tiny swing percentages in our horribly unrepresentative FPTP voting system. But my hope for an independent Scotland is that all of these people, on both sides, would have a say in their own government, in a way they simply don’t now.

I highly recommend volunteering, just to see what the atmosphere is like on the ground. Make sure you take good shoes, some water and some snacks, because it is knackering. If there’s a particular political flavour that you are interested in, there’s probably a Yes group for you, from Greens to Labour to Lib Dems, to Women, Business, Radicals, you name it. Give it a go, or come and speak to me next time I’m out.

40 Days to Yes Today marks forty days and nights until the independence referendum in Scotland. Despite all the coverage, it still feels a little like

A final case We’re down to the wire now. By the time I publish this, there will be less than 30 hours until the referendum. I await the result now with a sense