Bullet Journalling with Due app

In my continuing quest towards the analogue, I’ve been trying out bullet journalling, combined with a reminders app called Due.

Bullet Journalling is a ‘mindfulness practice disguised as a productivity system’, according to its creator Ryder Carroll. I tried it out a couple of years ago as part of a job switch, but at the time I found the system hard to reconcile with the flurries of things I needed to do each day.

I wanted One Thing to Rule Them All, so after a couple of weeks of not really using the system properly, I quit and went back to Things, a MacOS and iOS application that is really quite a good digital task manager. Seriously, it’s a beautiful, well designed and very flexible app. It just didn’t work for me in the end.

My issues with task management stem from the fact that I’m quite forgetful and also have high ambitions for any given day - a lot of small tasks and recurring habits I want to do, alongside bigger projects and long-term goals. Digital systems tend to handle these different levels of priority and recurrence poorly. I’ve always ended up with a kind of soup of stuff I want to do something about, which I’ve found very difficult to filter and work through. All I seem to do is periodically stir this task soup.

Some digital systems are so flexible and open in how they interpret tasks that they offer too many options and it’s difficult to settle on a good system of tags, or folders, or sub-checklists. You’re always fiddling with how to define a daily recurring task versus a monthly one, or how to capture a project versus an errand. On the other hand, other apps are so wedded to specific methodologies that they break down quickly when you try to use them in any other way.

With both kinds of system, I would periodically heavily reorganise. I was always tweaking things and sometimes burning it all down and starting again. And it was usually a feeling of frazzled overwhelm that made me do that.

As part of my stepping back from digital tools, I was doing a bit of thinking about what prompted that feeling of frazzle. And, counterintuitively, I’ve begun to believe that it is caused by convenience.

Do we actually want frictionless capture?

One of the founding principles of most productivity or todo list systems is the idea of capture; making a virtue of getting stuff (ideas, tasks, errands, massive multi-year projects, life goals) out of your head and into something else. Writing it down or tapping it out on a keyboard is the first step in making it real, in completing something. I’ve found this to be absolutely true, over and over again - if I want something to happen, I have a far larger chance of making it so if I capture it in some way, break it down into manageable steps and then start following through.

However, digital systems introduce extreme convenience to that capture process. There are whole ecosystems of apps and super-nerdy but really inspiring automation to make it ever-easier to get stuff out of your head and into that backlog.

For a long time, I was very firmly on the omni-capture train. I captured everything. I wrote Shortcuts to grab snippets of text and URLs, I played around with text capture templates, I slowly filled Things with several hundred tasks, projects, tags and notes. The task soup became steadily thicker.

But I found that along with ubiquitous capture, I was also constantly deferring. I lost count of the number of times I got to a Saturday morning and twenty or thirty tasks popped up on my phone, all the things I’d dutifully captured during the week. Much of the time, frictionless capture went along with frictionless deferment - it is very easy to just kick tasks into the long grass of next week.

Eventually, you end up running just ahead of a growing wave of deferred tasks, each one a small guilt trip for goals unmet, ambitions unachieved and bins not taken out. Frictionless capture means follow-through, actually doing the things I want to do on any given day, becomes more difficult. I ended up in a kind of self-imposed frazzled paralysis.

Time for a change

I decided to reintroduce friction to my life. There should be a moment of consideration about taking on a new task or responsibility or project. Do I actually want to do this?

Bullet journalling is all about friction - it’s paper-based, relies heavily on repeatedly writing out monthly, weekly and daily task lists and comes with some very clever ways of collecting and managing lists of stuff - books you want to read, goals for the year, you name it.

Where I fell down with it on previous attempts was that I treated the bullet journal as a ubiquitous capture system, the same way I did with Things. And that broke down quickly, as I tried to manually copy dozens of tasks per day. That became intensely time consuming and annoying.

I loved the idea of the bullet journal, but it wasn’t quite working for the range of things I wanted to remember. The friction was great for making me think about bigger goals a bit more, but what about the lists of things I needed to do every day, or on a schedule, or at a specific time?

Why can’t you just remember them? I hear you ask. Well, I’ve tried. But I am honestly fairly forgetful and it has always really helped me to just work through a list, written or otherwise.

But when you combine a dozen or more daily micro-tasks with bigger goals and the rolling tide of deferred tasks I mentioned above, plus time-sensitive things like calling someone at a specific time, you end up with something that really doesn’t work on paper. The friction involved in copying and managing these different kinds of stuff becomes a drag rather than a useful filter. 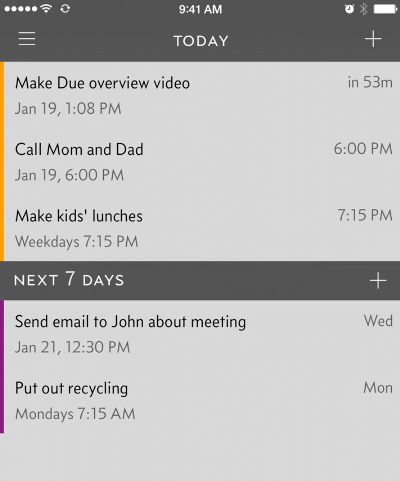 Due is an incredible reminder app. It’s not a full-blown task manager, just a list of stuff with due dates and times. But what makes it incredibly flexible is its customisability. You can set different default times, quickly reschedule things with single taps, change on a per-reminder basis how it reminds you, you name it. Here’s a somewhat dated but still useful overview (covering Due 2, now replaced by Due 3) of what you can do with it.

I have Due set up to manage my morning and evening ‘microtasks’ - daily things that I know I need to do, but often forget. Boring things like making sure I clean out our cat litter box, lock the door when we head to bed, lay out my workout clothes for my morning run, that sort of thing.

These kinds of microtasks felt like annoying clutter in a digital system and unsustainable drag in a paper one. But in Due, I have these repeating reminders set to quietly buzz me at roughly the time I usually do them, so the app list acts both as a prompt to do things and a quick record of what I’ve not yet done. This is a nice balance because these everyday, non-urgent tasks aren’t mixed in with bigger goals - they are a standalone, rolling reminder list.

I also use Due for weekly, fortnightly and monthly tasks I’d otherwise forget about, like maintaining our robot hoover, or making sure I back up my laptop. These appear on the relevant day like any other microtask.

Finally, I use it for intra-day time-sensitive tasks. If I need to remind myself to stop at the shops on the way home to pick up a bottle of milk, or leave by a certain time to catch a bus or train, I use Due to set a timed reminder. I generally use slightly more insistent alert tones for those ones. The super-fast interface for Due makes picking alert tones and snooze defaults really fast.

My days vary and some days I don’t use my bullet journal at all. But I do carry it everywhere. If something comes up that I want to address during the day, I rapid log it. I also use the journal to capture notes, memories and the other small things that tend to fall through the cracks in a digital, purely task-focused system.

My bullet journal is pretty much vanilla, using the basic bullet types and signifiers described in the introduction to the system (although I’ve come up with one or two Collections of my own). When you’re researching bullet journalling, it can be very easy to get a bit intimidated by both the complexity and artistry of some of the examples you’ll see, but starting as simple as you can is the best approach, I promise.

As described above, repeating things go into Due, as do time-sensitive things. So the bullet journal is largely used to track what I want to do and what I’ve achieved in any given day, while Due is in the background prodding me to do the tiny, everyday tasks I’d otherwise forget or put off.

A work in progress

As with anything, my use of this dual system is evolving over time. Sometimes I really miss the convenience and lovely design of Things. If you’re not like me and don’t end up creating task soup, then I really do recommend it.

But the best part about this system is that I’ve largely ceased to think of it as a system. Systems require a lot of tweaking and optimisation, whereas this has faded into the background of my life. It’s a useful record and it keeps me pretty well focused, but it doesn’t induce stress or require a lot of maintenance. Mostly I just don’t think about it anymore. And overall, I think I’m achieving more of what I actually want to achieve, doing the very necessary life maintenance stuff more consistently and generally spending less time farting about with task management and more time actually doing things.

So if you’re finding yourself feeling a bit frazzled and the red number badges on your task app(s) are making you feel guilty and annoyed, give it a try.

Switching blogging systems is my thing At some point, the only posts on this blog are going to be semi-annual announcements that I’ve just laboriously ported my archive to another

What I’m up to - June 2020 Here’s everything new as of the mid-point of 2020. This is an archived post, created from a previous version of my Now page. View my current Now